The El Dorado Dry Lake is a location in the Mojave Wasteland in 2281, situated north of Novac and southwest of Boulder City along Highway 95.

The expanse of the dry lake stretches from HELIOS One to Vault 11. The land is inhabited by a vast number of fire ants. Many plants can be found here, including jalapeño peppers and barrel cacti. An abandoned trailer rests at the northern edge of the lake, near the remnants of a military convoy.

Dead pack brahmin and corpses in the pool of blood

Close-up of the brahmin corpse

Watch out for giant ants

A Flea tipped off the truckbed

Motorcycle on the flatbed

Only street cleaner in the game 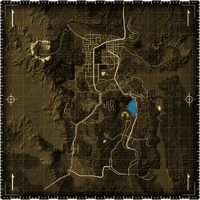