Edwin McMasters Stanton (December 19, 1814 – December 24, 1869) was an American lawyer and politician who served as Secretary of War under the Lincoln Administration during most of the American Civil War.

Edwin Stanton is known for leading the manhunt for John Wilkes Booth, the assassin that killed Abraham Lincoln.

Edwin Stanton is mentioned only in Fallout 3 on the John Wilkes Booth wanted poster. 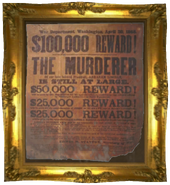 The in-game poster.
Add an image to this gallery
Retrieved from "https://fallout.fandom.com/wiki/Edwin_Stanton?oldid=3262700"
Community content is available under CC-BY-SA unless otherwise noted.