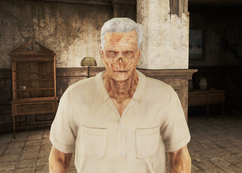 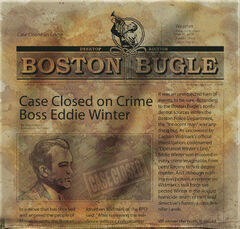 “Don't tell me you actually cracked my code? In the holotapes? Ha ha ha ha ha! Well hey, it's only been... what? Two hundred years?”

Eddie Winter was a notorious criminal and leader of an Irish crime family operating in Boston before the Great War. The Boston Bugle reported that he owned a sub shop in South Boston. He ordered the assassinations of Ron Trevio and Johnny Montrano, Jr. and participated in several robberies.[2] He was also a business partner and was involved in operations with the Wicked Shipping company.[3]

In 2077, Captain Jonathan Widmark and his Boston Police Department task force launched an official investigation on the mob boss, code-named "Operation Winter's End." During this investigation, the extent of Winter's crimes were revealed. He was involved in almost every type of crime, ranging from petty larceny to first-degree murder. It was suspected, though not proven, that Winter was behind the murder of the fiancée of the lead detective, Ms. Jennifer Lands, in August 2077.[4] Around October of that year, the Boston Police Department closed the case against Winter. This was done due to Winter's deal with the BADTFL to incriminate his associates. His cooperation with the district attorney granted him immunity from prosecution for his crimes.[5]

Eddie Winter willingly became a ghoul through a radiation experiment to obtain eternal life.[6] His choice of life as a criminal eventually catches up to him.

Eddie Winter appears only in Fallout 4 and mentioned in the Fallout 76 Wastelanders update.

Eddie is most likely the Fallout universe's parallel to real life kingpins James Joseph Whitey Bulger Jr. and Howard Thomas "Howie" Winter, both of whom once led Boston's infamous Winter Hill Gang. Like Eddie, Whitey Bulger led a prosperous criminal empire before suddenly disappearing around Christmas in 1994. Bulger remained at large for 16 years until his arrest on June 22, 2011, in Santa Monica, California. He was found guilty of multiple counts of racketeering, money laundering and murder (among other charges) on August 12, 2013. Bulger's story was eventually made into a movie, Black Mass, starring Johnny Depp as Bulger. Bulger was killed while inside of his prison cell on October 30, 2018, aged 89.

Retrieved from "https://fallout.fandom.com/wiki/Edward_Winter?oldid=3292242"
Community content is available under CC-BY-SA unless otherwise noted.