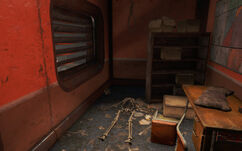 Doctor Edmund Medford was an organic chemist in the Nuka-Cola Corporation's Beverageer Division before the Great War.

The second-best organic chemist on the team behind Dr. Ruth Leavitt, the mild-mannered Dr. Medford naturally fell in line behind Lead Beverageer Rex Meacham and his colleagues. When John-Caleb Bradberton formed a partnership with the U.S. military through General C. Braxton to develop chemical weapons, Meacham jumped at the opportunity, and Medford and his colleague Dr. Kevin Bennell accepted with no complaints. The team was provided with a cutting-edge laboratory built into the foundations of the Nuka-Cola bottling plant, provided with a dedicated reactor and living quarters, allowing the Beverageers to work around the clock.[1]

Medford's work contributed to Project Cobalt's first fruits - the Nuka-nuke and Nuka-Cola Quantum - and he was given three weeks of vacation time like the rest of his colleagues. However, the military applications of the project did not sit well with Dr. Leavitt. As the rest of the Beverageers continued to focus on Project Cobalt, Leavitt found it impossible to remain in the Nuka-Cola Corporation's employ, openly confronting Meacham in early October and declaring her resignation at the end of the month.[2] This was a major loss for the team; Medford was the only other organic chemist qualified enough to pick up the slack, and he was still nowhere near her level of expertise. Over the next few weeks, the other Beverageers pleaded with her to change her mind. Meacham tried to intimidate her into staying, Bennell tried to appeal to her through flattery and reason, and Medford simply followed Bennell's lead.

The arguments continued until the Great War struck on October 23, 2077. Medford and the others were all trapped as Bradberton activated his panic button, engaging the automated safety systems and locking down the lab with the Beverageers inside.[3] Within a few weeks, isolation started to take its toll on the research team, and Dr. Medford was the first to break under the strain, hanging himself in his dormitory room. His death shocked his colleagues, who each responded differently. Meacham brushed it off, considering Medford's suicide an act of weakness. Bennell instead tried to escape into his work and avoid confronting his fears, while Leavitt angrily contested Meacham and eventually attempted to leave the lab.[4][5]

His skeleton can still be found in the Nuka-Cola bottling plant's secret lab in 2287.

Edmund Medford appears only in the Fallout 4 add-on Nuka-World.

Edmund Medford's name is an amalgamation of the names of Dr. Harold Medford, a character in the 1954 science fiction monster movie Them!, and the actor that portrays him, Edmund Gwenn.

Retrieved from "https://fallout.fandom.com/wiki/Edmund_Medford?oldid=3349522"
Community content is available under CC-BY-SA unless otherwise noted.