Caucasian
“It's THE place to live. The only place one finds any modicum of civilization and breeding.”

Edgar Wellington II is a resident of Tenpenny Tower in 2277.

Edgar Wellington spends most of his time in his suite with his wife, Millicent, who he despises; but like her, he only leaves to eat a couple of times a day. He sleeps with her in their bed a few hours every night (and sneaks out to sleep with Susan Lancaster on Mondays).[Non-canon 1][clarification needed]

He is very proud of his luxurious lifestyle at Tenpenny Tower and believes himself to be above the common wastelander. Like most of the residents of Tenpenny Tower, he is a ghoul-hater due to Roy Phillips' persistent efforts to get inside.

Wellington is married to Millicent Wellington, but also has an affair with Susan Lancaster, an ex-slaver and the resident prostitute.

Wellington spends the day walking around Tenpenny Tower together with Millicent Wellington. She attempts to talk to him, but he shows little interest and doesn't listen to her, which in turn makes her angry. On Monday nights Edgar sneaks out of his room and spends the night with his mistress, Susan Lancaster.

Tenpenny Tower: He is one of several bigoted residents the player character can try to convince to change his mind if the player is attempting to help move Roy Phillips and the ghouls into Tenpenny Tower peacefully. Edgar is a rude individual due to his upper-class status, looking down on the player and talking negatively if the player speaks positively about the ghouls.

A love letter found in Susan Lancaster's room reveals that he is having an affair with her. If this letter is shown to his wife Millicent Wellington, she will proceed to track him down and murder him, and then Susan. The newly widowed Wellington will leave Tenpenny Tower. 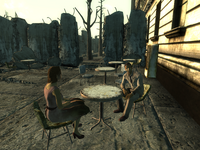 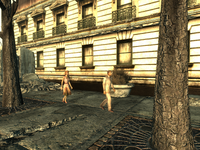 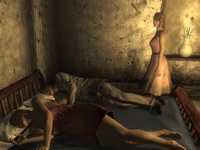 Edgar to share his bed with Susan Lancaster, and Millicent stayed on the sideline...