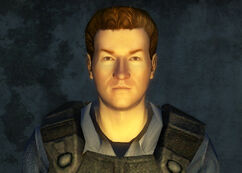 I Fought the Law
Eddie's Emissary

“{explosion heard}Sounds like they're already here. There's no way I'm letting them take me alive. There's no reason for you to stick around and help us, but feel free to kill a few of the bastards on your way out.”

Eddie is the leader of the Powder Gangers operating in the NCR Correctional Facility in 2281.

Eddie is the leader of the Powder Gangers and can be found on the top floor of the administration office in the NCR Correctional Facility, having occupied the warden's office. Eddie, a former NCR prisoner, assumed control over the Powder Gangers after Samuel Cooke, the original leader of the prisoner uprising, left north with a group of followers to Vault 19 in order to wage a personal war against the NCR. Since then, Eddie has led the former prisoners as they have raided caravans passing near the NCRCF, always making sure that every Powder Ganger gives him a cut of the spoils.

If asked for work, Eddie will give the quest I Fought the Law. Killing him will result in the failure of the quest unless progressed far enough to betray him to the NCR. A positive reputation with the Powder Gangers will grant dynamite and various gunpowders from him. He will give out a maximum of 5 dynamite and 20 each of rifle and pistol powder once an Idolized status with the Powder Gangers is attained.

Eddie is protected at all times by three Powder Ganger bodyguards, as well as his good buddy Scrambler, the toughest member of the Powder Gangers.

Eddie and his bodyguard, Scrambler
Add a photo to this gallery
Retrieved from "https://fallout.fandom.com/wiki/Eddie_(Fallout:_New_Vegas)?oldid=3354624"
Community content is available under CC-BY-SA unless otherwise noted.