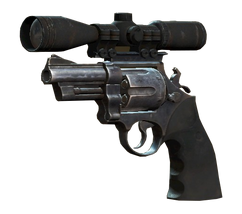 Eddie's Peace is a unique .44 pistol found in Fallout 4.

This snub-nosed .44 pistol is the primary weapon of choice of crime boss Edward Winter. The weapon was in Eddie's possession as he went into hiding during the nuclear holocaust.

Eddie's Peace is a snubnosed .44 pistol with a scope and polymer grips attached. It has the Crippling effect, which deals 50% extra limb damage.

Dropped by Eddie Winter after killing him.

Retrieved from "https://fallout.fandom.com/wiki/Eddie%27s_Peace?oldid=3451446"
Community content is available under CC-BY-SA unless otherwise noted.