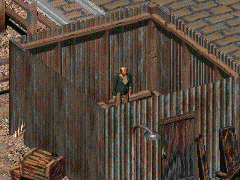 “When I was a lot younger, I used to drive brahmin through the 'Big Circle'... Broken Hills, New Reno, Redding, the Den, Modoc, then back here. It just got too dangerous after a while, so I settled here.”

In 2241, Ed is a non-citizen of Vault City and resident in the courtyard entrance.

Ed is a gap-toothed man in a dirty blue shirt who smells of brahmin.[1] He is brahmin dealer, who can be found day and night, in a shanty shack near a pen of brahmin.

Retrieve the GECK for Arroyo: the Chosen One can be lead to Ed by asking Vic where he found the "Vic's water flask". When near the shack, Vic will say, "This looks like Ed's place. He's the one I bought that water flask from". The Chosen One can ask him about the origins of the flask. Then he will give the locations of some towns, like Redding, New Reno or Broken Hills.

Ed appears only in Fallout 2.

Retrieved from "https://fallout.fandom.com/wiki/Ed_(Fallout_2)?oldid=3408186"
Community content is available under CC-BY-SA unless otherwise noted.