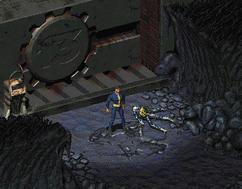 Ed is a skeleton in a vault suit which lies just outside the exterior door of Vault 13 in 2161.

Ed is a deceased human found initially outside of Vault 13. Little, if anything is known about his past prior to this. From his apparel though, it is visible that he too was a resident of Vault 13.

Ed's purpose is twofold: to immediately show that the outside world is dangerous, and to tell the Vault Dweller that they weren't the first person to leave the vault.

Ed's corpse appears only in Fallout, Fallout 2 and also is mentioned in Fallout Bible.

In the PMV Valdez
Add an image to this gallery
Retrieved from "https://fallout.fandom.com/wiki/Ed_(Fallout)?oldid=3188978"
Community content is available under CC-BY-SA unless otherwise noted.