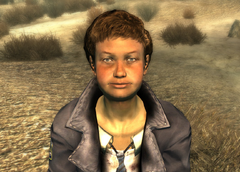 “Oh, really? So you're saying you brought back three more hungry mouths, too? Great, you're just making my day better and better!”

Eclair is a boy who runs the Spelunkers restaurant inside Little Lamplight in the year 2277.

Eclair was born in 2264. Previously, he scavenged outside, but after getting shot in the foot, he was out of commission for a couple of months. During that time, he managed the food, using the scraps of cookbooks he found while scavenging with passable results. He does an excellent job with the cave fungus that makes up most of their food. He occasionally tries to create more elaborate food from his cookbook scraps, often with disastrous results (hence his nickname).[1]

Eclair spends most of his time behind a counter in his restaurant, "Spelunkers" in Little Lamplight. He can also sometimes be seen around the restaurant when there are no other non-player characters in the area.

Eclair appears only in Fallout 3. He is also mentioned by Robert MacCready in Fallout 4.[2]