BeardFullOld
“They're slavers, led by a guy named Caesar. Or Caesar. Not sure how you're supposed to say it. A couple of years ago they tried to take over Hoover Dam, but the NCR beat them back. The NCR didn't - or couldn't - finish the job, though. The Legion's got its strength back and is getting ready for another round at the Dam. My money's still on the NCR winning, but you never know. We've been hearing stories about Legionaries on the Nevada side of the river, so keep a gun handy. You don't want to get caught by them.”

Easy Pete is a former prospector living in the town of Goodsprings in 2281.

Easy Pete used to be a prospector, looking for working tech, unexpired chems and guns to sell.[1] He previously had a "real good claim out east by the river," but lost it due to raiders. He eventually got too old for the prospector life[2] and decided to settle in Goodsprings to get away from NCR politicking and expansionism. Now he "takes it easy" watching over the brahmin and bighorner herds.[3]

While Easy Pete doesn't care for the NCR's expansionist politics, he admits that the NCR has a lot of good, decent people. He also doesn't mind that the NCR keeps Caesar's Legion out of the Mojave,[4] for which he cares little for, and even warns the Courier to keep a gun handy should they ever encounter the Legion.[5] This also extends to the likes of the Powder Gangers, who have been harassing the town more and more lately and wants things to just stay quiet for a change.[6]

In his prospecting heyday, Easy Pete was well versed in the use of explosives and considers himself an expert, and even has a deaf ear from using it too much.[7] He still keeps a stash of dynamite buried around Goodsprings if ever a need arises for it, but won't let amateurs handle it for obvious reasons.[8][9][10][11]

Easy Pete's general attitude is just that, taking it easy. Although he is quick to give advice when it's needed.[12][13] He's a helpful good-natured man[14] who despite being partially deaf is still a keen observer[15] and is able to read people like a book.[16][17] Even in cases like Victor, who he determines to be a nothing more than a harmless robot with nowhere else to be.[18]

Easy Pete can be found outside the Prospector Saloon, taking it easy in a chair. Easy Pete owns the eastern house in the town. The items in his house can be taken without gaining bad Karma. Additionally, the Courier can sleep on his bed freely. He may also be found having a meal in a booth in the Prospector Saloon.

Easy Pete is one of the only non-player characters outside Caesar's Legion, besides Marcus, Follows-Chalk, and Salt-Upon-Wounds that pronounces Caesar with the traditional Latin pronunciation /ˈkaisar/, rather than /ˈsiːzər/. 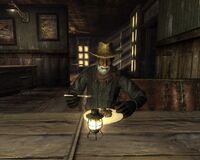