Easy City Downs is a location in the Commonwealth in 2287.

The area is built upon a pre-War horse track, now inhabited by raiders and Triggermen. There are also a number of non-hostile robots racing around the track, which include models such as the Mister Gutsy, Mister Handy, Assaultron, and Eyebot. Throughout the area, there are several terminals that can be used to shut the bots down, turn them on the raiders and Triggermen, or cause them to self-destruct.[Non-canon 1]

The northwest side consists of derelict bleachers, while southwest is Eager Ernie's lair on the upper floor, accessible by the walkway from the center or by jumping on the two table umbrellas from the stands. To the east is the actual track, in the center of which are a number of small fortifications filled with minor loot and raiders. On the south side of the center is a stable where the backups bots are stored.

Roadsign directing to the racetrack

Diner next to the clubhouse

Billboard at the track 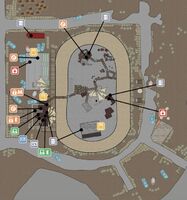