Eastern Regional Penitentiary is a location in the Toxic Valley region of Appalachia.

Eastern Regional Penitentiary was founded in 1866[1] and housed convicts from Appalachia as well as its surrounding areas. Budget and staff cuts prevented substantial and crucial renovations to the buildings, leading to a state of major disrepair, with some corrections officers raising the possibility of the prisoners one day simply pulling the bars off from the walls.[2]

The solution to the problem was to eliminate the need for walls at all. All prisoners wore explosive collars no matter the severity of their crime, from unpaid parking tickets to the most hardened, serial criminals permanently sealed in solitary confinement, like Mad Dog Malone.[3] Warden Thomas Brennan was an enthusiastic advocate of these new measures and pushed for full automation of guard personnel. He was successful and, for his loyal service, he was designated the sole human overseer of the facility until his retirement plus benefits. Everyone else on the payroll was discharged, leaving the inmates in the hands of uncaring robots and a perfectly logical mainframe that knew not nuance.[4]

Cell Block D was used nominally for members of criminal organizations but its inmates counted union organizers and Communists,[5] with block C used for solitary confinement. Only blocks A and B had a sense of livability, meant as General Population and Minimum Security blocks respectively.[6][7] Some inmates in Minimum Security were provided with "amenities," including windows.[8] After the Great War, super mutants occupied the prison yard.

The prison is located on the edge of the Toxic Valley and is clearly identifiable due to its tall sandstone walls and towers ringing the perimeter. Super mutants are plentiful, primarily inside the prison yard. The yard contains storage sheds in the northeastern part, which contain several workstations for power armor, weapons, armor, and tinkering. Just next to them is the exercise yard, with a church and office pods on the opposite, western side of the yard.

The interior of the penitentiary wraps around the southern edge of the penitentiary and contains four cell blocks spanning two floors each, with two per wing. They are joined together by the prison administration building in the center, which contains the entrance, visiting, intake and processing room with automated barber chairs, with the warden mainframe and derelict robot storage on the upper floor.

The Eastern Regional Penitentiary appears only in Fallout 76.

Pods in the yard

View of the yard from the north 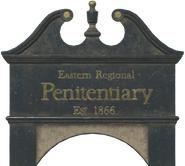