The Eastern Commonwealth was one of the thirteen commonwealths of the pre-War United States.

Pennsylvania soon after the War is described as having been heavily bombarded by nuclear ordnance, as being "cratered" and highly irradiated, with likewise heavily irradiated crops. It is described by settlers as being much more dangerous than Appalachia. While settlers and raiders would come to Appalachia from all over the wasteland, many would come from Pennsylvania.

The post-War ruins of Pittsburgh are the setting for the Fallout 3 add-on The Pitt.

Pittsburgh received significant damage during the Great War but, compared to other regions, radiation persisted for far longer in its three rivers, making the area heavily irradiated for centuries. The city was home largely to raider gangs and mutants and is described in the worst of terms. As early as 2103, raiders had already populated the region, enslaving survivors of the War and forcing them to construct the infrastructure of what would eventually become the Pitt.

The Eastern Brotherhood, on its expedition to Washington, D.C., came across the region in 2255. It was decided to sweep through the area militarily, gathering any useful materials along the way- this event became known as the Scourge. In the Scourge, the vast majority of mutants and any resisting raider gangs were wiped out, with the Brotherhood taking with them any children they found. As such, nearly the entire population of the Pitt was wiped out, while the Brotherhood suffered only one casualty, Ishmael Ashur, who was incapacitated when a building collapsed on him and presumed dead.

Ashur was later recovered by scavengers, and upon his recovery, he discovered a working steel mill. He then decided that he could restart Pittsburgh's industry, and set about recruiting what was left of the raider gangs to his cause. He was successful in restarting the steel mills, but in doing so encountered several problems. The pollution from the steel mills, together with radiation, resulted in the Troglodyte Degeneration Contagion, meaning all humans born under these conditions would eventually turn into wildmen or trogs. This forced Ashur to use slave labor to keep the Pitt going, forming a lower class of slaves, and an upper class of raiders, who also suffered from the pollution and radiation.

This created a large demand for slaves in neighboring regions like the Capital Wasteland. Ashur himself found slavery distasteful and sought a cure for the Troglodyte Degeneration Contagion, in the hopes that he could free the slaves and use a free workforce in the future. In 2277, Wernher, Ashur's former lieutenant, would try to lead a slave rebellion in the hopes of claiming the Pitt for himself, though it is unknown if he succeeded.

Philly, once reminisced upon by Abraham Washington, was the post-War ruins of the city of Philadelphia. He sent an expedition there to recover the Liberty Bell, to bring back and display at the Capitol Preservation Society.[2]

According to Everett, the Pitt raiders go out on raids in the town, and it is overrun by trogs and ghouls.

The cities of Rochester and Waynesboro are mentioned in the terminal of Thicket Excavations for having companies that supplied the worksite with materials. New York City was the location of the United Nations headquarters before it was disbanded on July 26, 2052. In addition, the Statue of Liberty can be seen in the Atomic Command game.

Appalachia is a vast swathe of West Virginia, which was also known pre-War as the Appalachian Territory. It is divided into six environmentally-distinct regions: Ash Heap, Cranberry Bog, Savage Divide, the Forest, the Mire and Toxic Valley. As most of Appalachia was not a major strategic target, the Forest and Savage Divide made it through the Great War mostly intact apart from radiation contaminating the watershed, however, the other four regions have since been subsumed by heavily mutated flora and fauna or hazardous air and weather conditions.

Appalachia was ravaged by a plague that wiped out practically all human survivors by 2102 when the residents of Vault 76 emerged to begin reconstruction. Approximately one year later, survivors from other regions of the post-War US would trickle into the region, forming settlements and raider gangs. 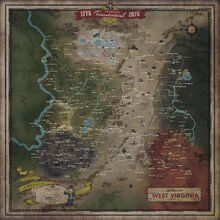 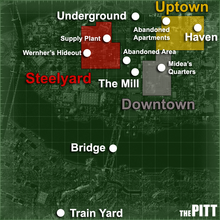 Map of the Pitt

Retrieved from "https://fallout.fandom.com/wiki/Eastern_Commonwealth?oldid=3337551"
Community content is available under CC-BY-SA unless otherwise noted.