Fallout: New Vegas
“The pump station is pretty run down, you could go take a look around the place, see if you find anything strange going on. What do you say?”— Morgan Blake

The east pump station is a location in the Mojave Wasteland in 2281. It is located between Vault 34 and the NCR sharecropper farms, just west of the monorail track system.

This location is of paramount importance to the NCR, as it is responsible for filtering the water being pumped along the giant water pipe from Lake Las Vegas, and then back into the sharecropper farms.[1]

There are two rooms inside the pump station itself, including an office room where the Courier can find a damaged terminal that can be used as one way to initiate the quest Hard Luck Blues. The terminal requires a Science skill of at least 50 to repair the network connection. The second room is through an unlocked door, serving as a reactor room containing no interesting items.

The pump station is connected by a pipe to the east cistern, which is accessible by a western facing door. Inside is a single room containing junk items, supplies, a few bottles of Nuka-Cola, and a copy of Fixin' Things, found on the desk against the north wall, next to a broken computer terminal.

The east pump station appears only in Fallout: New Vegas.

Inside on a wall, is a poster advertising the Sierra Madre casino, the location where the add-on Dead Money takes place. It also has "DEAD" written on a cubicle wall opposite it. A poster in the opposite corner for Dean Domino and two postcards on the tack board next to the computer also reference the Dead Money add-on. 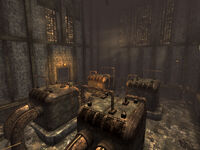 The water pumps inside the station 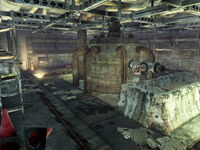