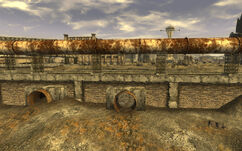 East central sewers is a sewer system underneath the New Vegas area.

This portion of the sewers is small compared to the other sections of sewer that can be found underneath New Vegas. There is a connection to the central sewers in the west and there are four exits to the surface. Two north exits lead to Freeside's East Gate and northeast of NCR Sharecropper Farms. The east exit leads to a pipe east of East Pump Station. The south exit leads to the surface near Aerotech Office Park. A storage room near the center of the sewer contains a Hard locked gun cabinet, which contains leveled guns and ammunition. The key for this cabinet, worn key, can be found on a glowing one in the central sewers near the multiplas rifle and terminal.

Sometimes, Max and Stacey from Freeside will run out of Freeside and enter the sewers.

The east central sewers appear only in Fallout: New Vegas.

Near the exit to the central sewers
Add an image to this gallery
Retrieved from "https://fallout.fandom.com/wiki/East_central_sewers?oldid=3152408"
Community content is available under CC-BY-SA unless otherwise noted.