Fallout 4
“With my blood I do swear my life to the Judge and his Jury until the end, upon pain of torture and death.”— Blood contract

The East Boston Preparatory School is a location in the Commonwealth in 2287.

The East Boston Preparatory School was founded by the Catholic Church as a religious preparatory school.[Non-canon 1] Before the war, students matched up with those attending D.B. Technical High School, another nearby Catholic institution, for Halloween Sadie Hawkins dances.[1] Over the years, the church was unable to sustain funding for the location, and local activists took over the school as a secular organization serving the immigrant population of East Boston.[Non-canon 1] The school was eventually abandoned during the economic recession before the Great War.[Non-canon 1]

A gang of raiders, led by Judge Zeller, has transformed the school into a reeducation camp to recruit new raiders and lure in unwary travelers.[Non-canon 1] This "reeducation" equates to torture; new raiders are broken in, each holding a blood contract which states their loyalty to the judge and his jury. Those who do not break are executed.[2][3][4][5][6][7]

The building is three stories tall, with the first flight of stairs next to the main entrance. The first floor is mostly blocked by debris but can be maneuvered through using classrooms. An airplane crashed through the southeastern wing of the school. Across from the entrance is a pair of chained doors that can only be accessed by the second floor. Farther down the hallway is another chained door, near which an exit to the Commonwealth can be found.

Across from the initial stairwell, through a restroom, lies a stage facility where the judge and his jury presumably meet, and which is hinted to host executions as well. Hop down to open the chained double doors to the entrance. Adjacent to the second floor hallway are two classrooms connected to each other. At the end of the hallway is a staircase on the right and a classroom directly ahead. The classroom allows the player character to jump down to the first floor and reach an otherwise inaccessible room with a book return terminal. The stairwell leads to the third floor.

On the third floor, available loot includes many ammo boxes. There are cells containing prisoners who can be freed by picking the cell doors (Novice), and terminals which detail the torturing of recruits. A set of cell keys can be found beside one of the terminals. There is a weapons workbench in the theater/execution room behind the chained double doors accessible from the second level.

The East Boston Preparatory School appears only in Fallout 4.

Cell key on the top floor 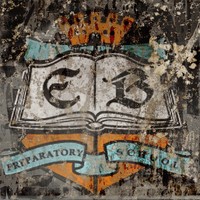