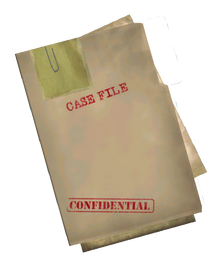 The Earl Sterling case notes is a paper note in Fallout 4.

It can be found inside the Valentine Detective Agency on a desk on the right after entering, as a part of the Detective Case Files quest.

Another disappearing act to unravel. Earl Sterling. Twenty-five year-old bartender at the Dugout Inn. One of the owners, Vadim Bobrov, noticed that Earl hadn't been into work for a few days.

Security was called in. No investigation, of course. "The Institute took him" is the unofficial word about town. Like always.

Vadim came into my office, half-drunk, with a sob story about how he and Earl went way back, and that he just can't believe that Earl would get snatched up by the boogeyman. My gut says he's right.

Earl didn't have any enemies, at least none with motive enough to kill the guy. Not living with anyone, either, so I'll have to see if Vadim or someone else at the Dugout has his keys. I'd rather not have to explain to security why I was picking the lock on Earl's door, if I slip up and get caught in the act.

Page 3
Add a photo to this gallery
Retrieved from "https://fallout.fandom.com/wiki/Earl_Sterling_case_notes?oldid=3181913"
Community content is available under CC-BY-SA unless otherwise noted.