Broken razor
“Poor Earl. Gone just like that. Such a good bartender. Good friend. Oh, but terrible with women, mind you. Bull in china shop with them.”— Vadim Bobrov

Earl Sterling is a deceased bartender who worked for Vadim Bobrov at the Dugout Inn in Diamond City in 2287.

Earl Sterling was a twenty-five-year-old resident of Diamond City who was a bartender at the Dugout Inn,[1] and was reported missing to the Valentine Detective Agency by Vadim Bobrov when he hadn't shown up to work for a few days.[2]

He was not very satisfied with his appearance and had trouble interacting with women. For those reasons, Earl sought plastic surgery from Doc Crocker.[3] After reporting to the Mega surgery center for his appointment, Sterling was murdered and mutilated by the doctor, who was driven mad by his obsession with faces upon seeing his patient.[4] Crocker subsequently hid Earl's grisly remains in the surgery cellar.[5] Vadim, worried for his friend's sudden, inexplicable absence, filed a missing person report.[2]

Earl Sterling appears only in Fallout 4. 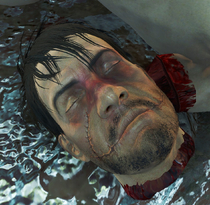 A closeup on Earl's face showing his scars in detail