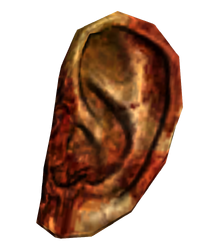 “The ears of the good of the world is all I ask and currency is what you will receive.”— Daniel Littlehorn

An ear is a miscellaneous item in Fallout 3.

Daniel Littlehorn from Littlehorn & Associates, located at the scrapyard, rewards the Lone Wanderer with 10 to 15 caps and -10 Karma for each ear. This is the bad Karma alternative to the Lawbringer perk, in which fingers are collected instead of ears.

Retrieved from "https://fallout.fandom.com/wiki/Ear_(Fallout_3)?oldid=3475553"
Community content is available under CC-BY-SA unless otherwise noted.