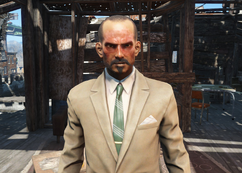 Eager Ernie is a mob boss of the Triggermen and the owner of the robot racetrack at Easy City Downs in the Commonwealth in 2287.

Eager Ernie and his gang of Triggermen managed to ally with the local raider gang at Easy City Downs. He is a skilled tinkerer, having scavenged and fixed up several old robots.[citation needed] With those robots, Ernie runs a successful robot racing business out of the old horse racetrack, making loads of caps.

As part of the deal to use the racetrack, Ernie and his men had to fork over much of their profits to Wire at Libertalia as a tribute. To attempt to circumvent the restrictions imposed by deal, Ernie began having Tommy cook their books while another associate worked to rig the races in their favor by working with the robots while they were offline.[1]

He uses the technology for his and his associates' own gain, never letting wastelanders come and watch his races, instead, shooting them on sight. Like the Combat Zone, Ernie's robot racing venue is only open to raiders.

Eager Ernie appears only in Fallout 4.

Retrieved from "https://fallout.fandom.com/wiki/Eager_Ernie?oldid=3246195"
Community content is available under CC-BY-SA unless otherwise noted.