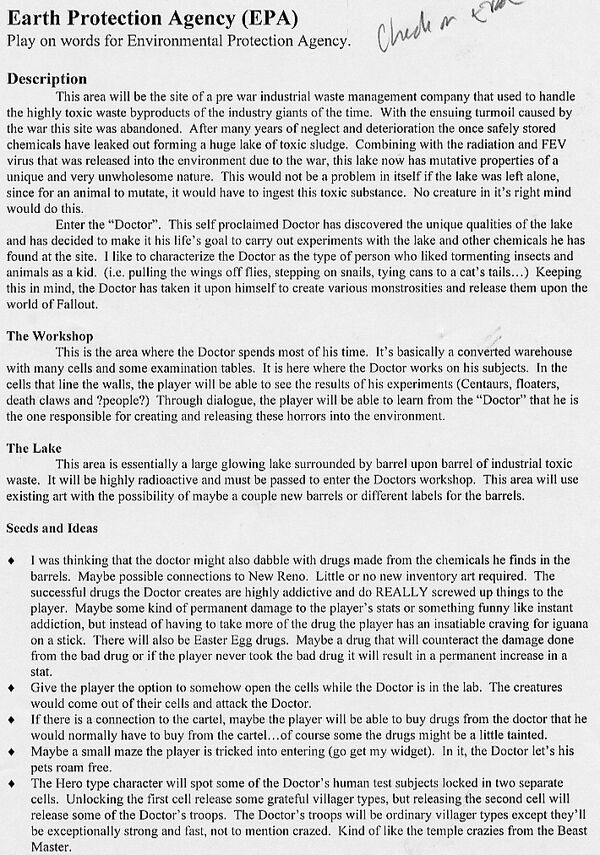 “We asked for the future. And we got it.”

The Environmental Protection Agency is a bonus location for Fallout 2. It's full of an odd assortment of puzzles, fighting, and various weird adventure "seeds" (literally), including, but not limited to:

The EPA was supposed to use the Vault City/Vault 13 tile set for interiors (bright white, like original vault). Special scenery objects include an EPA parking lot sign, and color-coded symbols on the walls, running the whole range of the rainbow.

The EPA is 4 maps large. These maps are small, and these "levels" often share the same map.

The breakdowns of map flow is listed below: 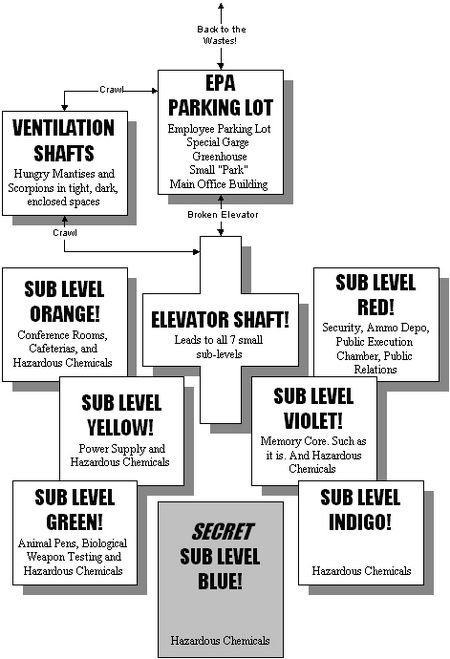 Carnivorous Jungle: The player has to navigate a jungle filled with Venus Mantraps. This isn't as much an adventure seed as a combat-based necessity in order to enter the EPA in the first place.

Hologram War: The player can encounter some of the custodial holograms that still fill the EPA corridors. They were mostly used as tour guides while the EPA was still in operation, but ever since the "Big Silence/Great Static" following the "Big Flash," they have become somewhat warped in their duties. They have taken the bureaucratic mentality to a lethal extreme, imposing regulation and regulation upon each other until they have become gridlocked in their duties and can no longer function. The heads of each division are currently arguing ad nauseum in one of the EPA conference rooms because the presence of a powerful magnetic field that keeps erasing their short-term memories (they keep repeating the same argument every five minutes, forget everything they say, then repeat it again) . Only by fixing the problem with the magnetic coils, interrupting the conversation and ordering them to stop can the player stop the gridlock.

Holograms can only be destroyed by an EMP grenade, or by stealing or destroying the EPA power core in Sub-Level Yellow.

Gas-Filled Level: One of the levels is filled with poisonous gas. If the player wanders around this level, he will take considerable damage every round until he leaves or dies. A player can either make brief "hops" onto the level to steal things from the labs there or else find an oxygen mask hidden on one of the lower levels that allows him to breathe freely as long as he has it in one of his two hands.

Ventilation Horror: In order to get access to the main EPA complex, the player has to navigate a series of ventilation shafts where he can only use small weapons against the inhabitants of the ventilation shaft: Giant Mantises, Small Scorpions, and the occasional man-eating plant.

Static "Zzzzzt": The player discovers one malfunctioning hologram that speaks only in static (like a fast food drive through speaker). If the player repairs the holograms projector (or slows down his speech), he can learn some important codes or other information.

Mr. Chemmie! The player discovers a small appliance in one lab (Mr. Chemmie) that takes various raw materials (plants, beer, condoms, chemicals, garbage, Scorpion tails) and turns them into various pharmaceuticals like RadX, Mentats, RadAway, and so on. The player can experiment with the machine to create certain drugs or bizarre substances. Characters with a high Intelligence, Luck, or a high Doctor or Science skill can create special drugs that no other character can.

The Brave Little Toaster: In one of the abandoned kitchens in the EPA is a small, intelligent toaster with an IQ of 6000. All of its brain power is focused towards convincing humans to make toast.[1] Dialogues with it will be somewhat one-sided, as the player will ask it a question, and it will respond with some question about whether the player will like toast or waffles.

While the toaster seems like just an incidental piece of strangeness, the toaster does happen to mention in its dialogue (almost in passing) that it is broken and can't access everything it needs to in order to successfully make toast. If the player repairs it, then the toaster can provide him with the following: the secret code for the vault in one of the New Reno casinos (which is otherwise near-unopenable), some secret codes for jinxing the slot machines out of their cash, and some other bonus items.

ABACAB: One of the computers in the EPA mentions a simple cure for epilepsy. Apparently, by repeating a series of letters with the proper inflections, a listener can be cured of either autism or epilepsy. If the player discovers this and goes to New Reno and says the code phrase to the Barking Man (who didn't make it into the game, so I put him in Planescape: Torment), then he will be cured and gives the player a minor reward (in addition to the minor experience award).

No News of a Thaw: The player may discover some hibernation cells in the lower levels of the EPA, and depending on what "type" of character he is (combat, stealth, or diplomatic), he can free one of three hibernating humans that have been preserved since the great silence.

Hologram 00000, Director of Science: A brilliant hologram that can't express himself properly... an electrical short has damaged his vocal abilities, and now he can only communicate through displaying binary numbers (a character with a high Science or Intelligence can 'read' the binary codes, decipher what he is saying and fix him).

Hologram 10001, Director of Security: A gung-ho marine hologram who peppers his speech with a lot of crude German phrases. He believes that everything in the complex should be killed and then the EPA allowed to "reboot." Fortunately, he can no longer command any of the robots, all the weapon defenses have run out of ammo, and all he can really do is bluster about how much he would like to destroy everything if he was in charge. If the player performs some tasks for this Director, they can get access to the Security Locker Rooms, which holds some old ammo, weapons, and some armor.

Hologram 12001, Director of Operations: A weasely, nervous-smiled male hologram. Only characters with a high Intelligence can make out what the hell he is saying since he uses so much doubletalk. Nothing can be gotten out of this director, since he has no authority over anything.

Hologram 10031, Director of Ground Maintenance: A frustrated hologram who is in charge of all the ground maintenance at the EPA. The fact he has no physical body and none of the robots do anything he says has forced him to operate at 100% inefficiency for the past few decades. The other directors always bring this up whenever they can. If the player fixes the robots or takes care of some of the gardening and landscaping problems around the EPA (killing the lethal plants), the Director will "hire" them, allowing them access to the EPA medical cabinet and storage shed (which contains new seeds, chemicals, herbs, and various insecticides and weed killers).

Hologram 40011, Director of Public Relations: This sexy-sounding (yet somehow prim and proper at the same time) hologram is in charge of all the tours and press releases. Her syrupy-sweet attitude and her constant stream of press releases gets annoying really fast. Nonetheless, the player cannot get to certain areas of the EPA complex without her... there are some portions of the complex that will only open if she leads the way (mostly the museums and petting zoo). Characters with a high diplomatic skill can get much more out of her than other characters.

There are no secondary characters. It's all or nothing in the cutthroat world of the EPA.

Zzzzzt: A malfunctioning hologram that speaks only in static until he is repaired. When repaired, he is quite relieved and can provide the player with information on various mysterious objects in the EPA sub-levels, along with codes that allow access to restricted areas.

Brave Little Toaster: A genius-level toaster. It has a 6000 IQ. It likes to make toast.

Retrieved from "https://fallout.fandom.com/wiki/EPA_design_document?oldid=3152142"
Community content is available under CC-BY-SA unless otherwise noted.