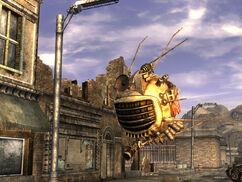 “If I had my way I'd dump it in the scrap yard in Novac and be done with the damn thing.”— Johnson Nash

ED-E My Love is a companion quest in Fallout: New Vegas.

The robot ED-E lies deactivated and in need of repair in Primm. It is a prototype "duraframe" eyebot containing research data and voice recordings from Whitley, an Enclave researcher. Damage sustained by ED-E over time has made accessing the data difficult. The voice recordings, however, can be unlocked with certain keywords spoken by various inhabitants of the Mojave Wasteland when talked to by the Courier. Accessing these audio logs brings ED-E to the attention of the Brotherhood of Steel and the Followers of the Apocalypse, who both wish to examine the robot further. The choice of which group will determine ED-E's upgrade as compensation for the research data it is carrying. There are other upgrades for ED-E that can be found in the Fallout New Vegas add-on, Lonesome Road.

There will be a broken robot found on a counter in the Nash residence in Primm. This building is on the corner opposite both the Vikki and Vance Casino and the Bison Steve Hotel; it will be on the right if crossing the bridge into Primm from the nearby NCR camp. The Nash residence is also known as the local Mojave Express office, according to the large sign on the roof.

Talk to Johnson Nash, the owner of the store, and mention the robot sitting on the counter. He will reveal that he does not know much about it, and will offhandedly suggest taking it to the junkyard near Novac.

Examining the broken robot will reveal that it can be fixed with the appropriate skills, or items:

After ED-E is repaired, enable its companion protocol.

There are two pre-recorded messages in ED-E regarding the databanks it is carrying. There is a 5 day waiting period after the first message is triggered before the second can be triggered.

The triggers for these messages are specific words or phrases found in the dialogue of different characters, usually occurring while talking to someone who used to be in (or talks about) the Enclave, or someone who talks about technology.

To trigger the first message, talk to any one of the following:

When the message is triggered, the Courier will be turned to face ED-E and an audio file will begin playing:

After this message (Audio log 1) has been triggered, the quest will be added to the quest log, but Audio log 2 (below) may not be immediately triggered. ED-E will not react to any further keywords until at least five in-game days have passed.

After passing at least five in-game days, do any one of the following:

Some of the characters that can trigger audio log 1 can trigger the second audio log, so long as they haven't triggered the first one.

As with the first triggered message, the Courier will be turned to face ED-E and the second audio file will begin playing:

After both the logs have been triggered, in approximately 2 in-game days the Brotherhood of Steel will express their interest in ED-E. Senior Knight Lorenzo will be talking through ED-E in a radio transmission:

“"Uh... Hello. Hi. Are you there? ..." (the message continues, and ends with a Spanish voice-over as a placeholder for Lorenzo)”

He goes on to say that he would like to examine ED-E and will ask it be brought to a patrol near the REPCONN headquarters, unless one has already been there and recovered the holotape in which case he'll ask them to come to Hidden Valley. Once there, go to the third floor where there is a dead member of the Brotherhood scouting party. A holotape note will be next to, or in the inventory of the corpse. As Lorenzo is speaking, his transmission will be interrupted by April Martimer of the Followers of the Apocalypse, asking that ED-E be brought to them instead. From here, choose which faction will upgrade ED-E.

Once the holotape has been acquired, the Courier will be prompted to go to Hidden Valley, where their bunker is located. To gain entrance to the bunker, Senior Paladin Ramos, the head of the security, will strip the Courier of all their belongings and will closely escort them to meet Elder McNamara. The elder will require being trusted, and will fit the Courier with an explosive collar to prevent trouble while carrying out a task for him.

In order to be trusted by the Brotherhood, Ranger Dobson will have to be taken care of. He is an NCR Ranger who is posing a threat to the Brotherhood's secrecy by patrolling nearby their bunker. Getting rid of him by any means necessary will gain the elder's trust, and will remove the explosive collar. With free clearance to the bunker, it is possible to talk to Senior Knight Lorenzo, who will be located on the second lower floor of the bunker.

Alternatively, the tasks above will not need to be done if access to the bunker has already been gained before this quest, or if Veronica is a companion. If the bunker has already been accessed, there will just be a prompt to meet Senior Knight Lorenzo. If Veronica is escorting the Courier they will not have to earn the trust, since she is held responsible for their actions.

Lorenzo will upgrade ED-E's armor as compensation for the databanks regarding Poseidon Energy research. This will give ED-E a defense bonus from base 8 DT to 20 DT (+12 Damage Threshold), and a refurbished metallic surface, clean of its stickers and the car license plate. After three to four days, ED-E will return to Primm.

April Martimer is a scientist for the Followers of the Apocalypse. She sees potential in ED-E, because its data can serve the greater good in the future if examined. She will be found in the Old Mormon Fort, the Followers' headquarters. The fort can be reached through Freeside's north gate. April will not make contact with the Courier until they have discovered Hidden Valley.

April Martimer will upgrade ED-E's weapon system to compensate for the data that can help the greater good in the future. This will give ED-E an extra laser zapper (+5 DAM, +5 shots/sec, +169 DPS, -0.01 Min Spread, +0.5% Critical Chance and +5 Critical Damage). ED-E will keep its usual laser but will use its new blaster at short-medium range. The bolts fired are similar to the alien blaster and its armor will be cleaned of its stickers and license plate. After three to four days, ED-E will return to Primm.

After three in-game days have passed, the quest advances and a message will appear saying that ED-E has returned to the Mojave Express building in Primm. Once the building is entered, the quest will be completed. However, one will still have to speak to ED-E in order to recruit them.

The name of the quest is a reference to the 1956 song "Eddie My Love" by The Teen Queens.

Retrieved from "https://fallout.fandom.com/wiki/ED-E_My_Love?oldid=3150459"
Community content is available under CC-BY-SA unless otherwise noted.