The Silo
The Courier
The End

This ED-E is a copy of the original ED-E Duraframe eyebot, manufactured by the Hopeville missile silo bunker's automatic engineering facilities.[2][3] The necessary information was obtained by remote scanning the eyebot.[4][5]

At first glance the Courier mistakes the robot for ED-E, who plays music from the TV show "Ralphie." With an Intelligence of 6, the Courier deciphers the beeps and garble and realizes that the silo has "pretty advanced engineering capabilities," since it was able to remote-scan ED-E from the Mojave Wasteland and create copies within the Divide. If one does not pass this check, the Courier will still observe this, asking ED-E "So, you're like a robot clone?"

Upon joining the Courier's party, ED-E starts playing a log from Dr. Whitley, and continues doing so at certain "checkpoints" during their trip through the Divide. Ulysses will also use ED-E to communicate to you throughout the Divide. ED-E will also show through certain dialogue choices that it misses Dr. Whitley and that it wants to be like Ralphie.

This copy of ED-E appears only in the Fallout: New Vegas add-on Lonesome Road.

Chris Avellone comments on ED-E's role in the events of the Divide. [Non-canon 1][Non-canon 2] 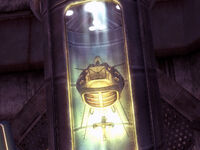 ED-E in an endings slide

ED-E expressing happiness to the Courier