“Eyebot Duraframe Subject E is both the prototype and the last functional model.”— Whitley on ED-E

ED-E is an Enclave eyebot from the East Coast.[1] It was built by Whitley at Adams Air Force Base. As a prototype "duraframe" model, ED-E has been enhanced for regular combat as opposed to the original model, which functions primarily as a mobile radio transmitter. However, since the war with the Capital Wasteland Brotherhood of Steel necessitated increased production of Hellfire armor, eyebot production was stopped, and ED-E became the last surviving model. Whitley uploaded an enormous amount of valuable data on Poseidon Energy and his duraframe research into ED-E's logs, then dispatched it on a cross-country journey to Navarro, past Rockville, Hagerstown, The Pitt, Dog Town, Nephi, Zion Valley, Caliente, the Hub, Necropolis, Lost Hills, and San Francisco.[2]

ED-E's first stop was a hidden Enclave outpost in Chicago for upgrades and repairs. It then traveled across the Mojave Wasteland where it was shot twice by an unidentified sniper, dealing a large amount of damage. This eventually left it deactivated near Primm, where it was found and taken in by a courier of the Mojave Express and given to Johnson Nash, the building's resident. Unable to repair it himself, Nash left ED-E to languish on Primm's branch office counter, where it remained while Primm was taken over by escaped convicts. When the Courier arrives in Primm, he/she is able to repair ED-E, allowing the eyebot to join the Courier's quest as a companion.

Although ED-E still retains all of its data and understanding of its mission, its internal positioning hardware is badly damaged. The only reason it has not been seized by interested parties is because ED-E has not communicated it's special mission to anyone.

In one of the Lonesome Road endings, ED-E sacrifices himself in order to stop the launching missiles. However he sends his memory files to his counter-part eyebot in order to preserve his memory. However as stated the Courier carried his memories on throughout the wasteland.

When first found in the Nash Residence of Primm, ED-E is broken and lying on a counter. To fix it requires one of the following:

ED-E appears in Fallout: New Vegas, and on the cover of All Roads. ED-E also appears in Lonesome Road as a companion. 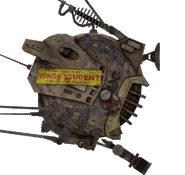 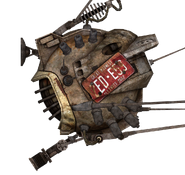 ED-E in the Fallout: New Vegas E3 trailer
Add an image to this gallery

Retrieved from "https://fallout.fandom.com/wiki/ED-E?oldid=1382704"
Community content is available under CC-BY-SA unless otherwise noted.