Eyebot Duraframe Subject E, also known as ED-E (pronounced "Eddie" or "E-D-E"), is a Duraframe eyebot and possible companion in 2281. It is first found in defunct state at the Nash residence in Primm.

ED-E is an Enclave eyebot from the East Coast.[Non-canon 1] It was built by Whitley at Adams Air Force Base around 2275.[Non-canon 2] As a prototype "duraframe" model, ED-E has been enhanced for regular combat as opposed to the original eyebots, which functions primarily as a mobile radio transmitter, and standard Duraframe models. These enhancements include an additional dish directed sensor, armor plating to protect the side mounted vacuum tubes, and a front-mounted, miniaturized Tesla cannon for improved offensive capabilities from the standard laser cannon.[Non-canon 3] However, since the war of 2277 with the Capital Wasteland Brotherhood of Steel necessitated increased production of the Enclave's Hellfire armor, eyebot production was stopped, and ED-E became the last surviving model. Whitley uploaded an enormous amount of valuable data on Poseidon Energy and his duraframe research into ED-E's logs,[1][2] then dispatched it on a cross-country journey to Navarro.

ED-E's first stop was a hidden Enclave outpost in Chicago for upgrades and repairs.[3] It then traveled across the Mojave Wasteland, where it was shot twice by a raider sniper (with a hand-load .308), dealing a large amount of damage.[4] This eventually left it deactivated near Primm, where it was found and taken in by a courier of the Mojave Express and delivered to Johnson Nash who hoped to use it for package delivery. Unable to repair it himself, Nash left ED-E to languish on Primm's branch office counter, where it remained while Primm was taken over by escaped convicts.[5] When the Courier arrives in Primm, they are able to repair ED-E, allowing the eyebot to join the Courier's quest as a companion.

When first found in the Nash residence at Primm, ED-E is broken and lying on a counter. It can be repaired by having one of the following:

ED-E appears in Fallout: New Vegas and on the cover of All Roads. A clone of ED-E also appears in the add-on Lonesome Road, as a companion. 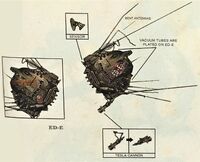 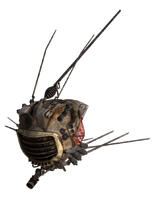 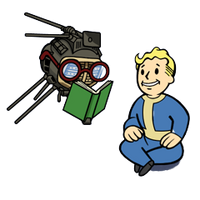 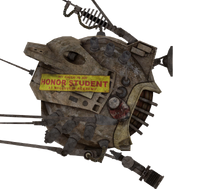 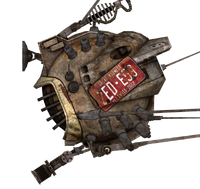 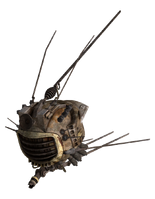 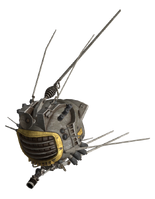 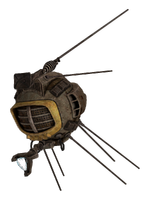 ED-E in an endings slide of Lonesome Road