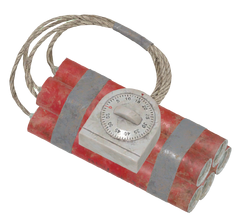 Dynamite bundle is a weapon in the Fallout 76 update Wastelanders.

Dynamite has an explosive core made of a mixture of nitroglycerin and a variety of other sediments wrapped in red paper. The protruding fuse is ignited before the explosive is thrown, causing the dynamite to detonate after a short delay. The dynamite bundle consists of five sticks of dynamite taped together with each fuse leading to an egg timer. Although the timer is set at 15 units, the explosive will detonate within five seconds.

While similar in range and weight to dynamite and the fragmentation grenade, the dynamite bundle has an increased explosion radius and deals nearly the same damage as a Nuka grenade. The dynamite bundle is considerably cheaper to craft than other explosives of its caliber, not requiring the usage of aluminum or springs.

As with other items only available after the main questline of Wastelanders, dynamite bundles cannot be traded, dropped, or sold to vendors.

Dynamite bundles can be crafted at a tinker's workbench if the corresponding plan is known. After the main questline of Wastelanders, the plan can be bought from Mortimer for 200 gold bullion with a raiders reputation of at least Cautious.

Retrieved from "https://fallout.fandom.com/wiki/Dynamite_bundle?oldid=3469500"
Community content is available under CC-BY-SA unless otherwise noted.