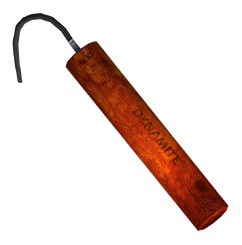 Dynamite is a thrown explosive appearing as a weapon in Fallout: New Vegas.

Dynamite is an explosive consisting of nitroglycerin-soaked powder pressed into sticks and wrapped in wax-coated paper.[1] A fuse allows it to be detonated. As the NCR expanded its reach across the former southwestern states, it used prison labor to rebuild and lay down new train tracks as well as clear rubble and debris from roads to make travel and transport easier.[2] For this task, dynamite was often used to clear away boulders that got in the way. The prisoners of the NCR Correctional Facility in Nevada took over the prison using stolen dynamite and other improvised weapons, turned the prison into their new base of operations, and declared themselves the Powder Gangers." True to their name, they have an ample supply of dynamite from their chain-gang days.

A single stick of TNT, this ancient mining and demolition tool is an effective starter weapon for Explosives-based characters. It comes with a three-second fuse and is tossed in an arc when lit. It requires 1 Strength to use and has a blast radius of approximately 11.7 yards (10.70 meters).[3] It is marked as inert and bears a pair of stars and stripes printed on the waxed paper, each bearing 50 stars. This weapon qualifies as an improved holdout weapon.

A stick of dynamite being used on a giant ant 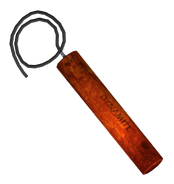 Angel pin-up girl on the zippo used to light dynamite 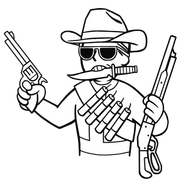 Dynamite in the Cowboy perk