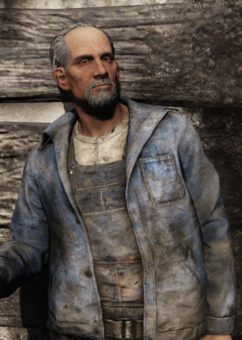 Dylan Rhodes is a man living in Appalachia in 2103.

Dylan is a former miner from Welch. He grew up in the town before it was destroyed by mining under orders of Atomic Mining Services and the subsequent Great War. Dylan, now aged 64, intends to live out his remaining years in what's left of Welch and see where it leads him. He also has become very anti-social, not wanting to spend much time speaking with visitors due to his bitterness over his job being taken over by automatons.

Using an Endurance 4+ SPECIAL check upon first meeting him earns a box of Sugar Bombs. Dylan expresses gratitude for seeing someone willing to get down and dirty and not let the robots do it for them.

Dylan Rhodes appears only in the Fallout 76 update Wastelanders.

Retrieved from "https://fallout.fandom.com/wiki/Dylan_Rhodes?oldid=3414959"
Community content is available under CC-BY-SA unless otherwise noted.