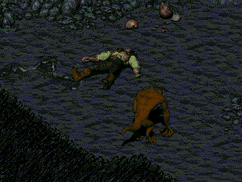 The dying mutant is a scout of the Master's Army around 2161.

This super mutant is one of the first people who were dipped in the FEV vats in the Mariposa Military Base. He can be found in the deathclaw's lair near the Hub, hurt badly after being assaulted by a deathclaw and dragged to its lair.

Rather than speaking to the mutant first, it is possible to kill him for 300 XP as well as loot both the radio and the holodisk.

The dying mutant appears only in Fallout.

Retrieved from "https://fallout.fandom.com/wiki/Dying_mutant?oldid=3470099"
Community content is available under CC-BY-SA unless otherwise noted.