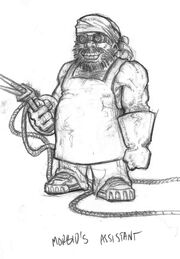 Dwarf is a term referring to a human with dwarfism.

Humans with dwarfism are noticeably shorter than other humans, with a distinctly proportioned silhouette. Apart from their appearance, there's no difference in mental potential. They can be servants or reach positions of power and influence like other humans, particularly in the developed societies of New California.

Dwarfs only appear in Fallout and Fallout 2.

Retrieved from "https://fallout.fandom.com/wiki/Dwarf?oldid=3366151"
Community content is available under CC-BY-SA unless otherwise noted.