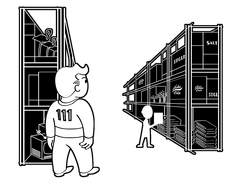 “I've received reports that supplies have been disappearing from our supply depot at the airport. I suspect this may be an inside job.”— Lancer-Captain Kells

Duty or Dishonor is a Brotherhood of Steel side quest in Fallout 4.

Talking to Captain Kells will start the assignment. He will ask the Sole Survivor to report to the logistics department and investigate a case of missing goods.

Knight Sergeant Gavil is the first contact and they will brusquely deny any accusations and direct the Sole Survivor to Knight Lucia and Initiate Clarke, since none of the other people in the department should be disturbed, also as the newest additions they are the most likely suspects.

Shadowing Clarke will lead the Sole Survivor to the Boston Airport ruins. Upon entering the ruins, the Sole Survivor must find Clarke. Go to the right from the elevators that require an ID card, open the door, and head down the stairs and through a tunnel. In a room to the left, the body of Knight Rylan can be found. Killing ghouls on the way to Clarke will not cause him to be hostile; killing the ones where Clarke is found, however, will make him hostile. Further down the tunnel, the Sole Survivor will be tasked with the optional quest to exterminate the ghouls. At the end of the flooded tunnel blocked by a gate, the Sole Survivor must go up the ramp on the right and through the stairwell/tunnel until one gets to an underground parking garage. Traverse the underground parking garage until arriving at a subway tunnel. Take the subway tunnel until one gets to the next platform, which will lead to a luggage terminal.

Upon entering, take the stairs down and follow this tunnel until arriving at a room that Clarke is in, which is above the generator room with a bunch of ghouls. Opening the generator room and killing the ghouls will cause Clarke to automatically become hostile forcing the Sole Survivor to kill him. Similarly, entering the next room adjacent to the room Clarke is in without talking to him will cause him to become hostile.

The ID card is on the desk that has the [expert] terminal. This is needed to open the doors and use the elevators. Another ID card is available from Clarke. If no ghouls were killed and the Sole Survivor has settled on confronting Clarke directly, there are four options:

Upon completion, Kells will give the Sole Survivor one of several rewards depending on what happened to Clarke. Only by convincing the traitor to turn himself in will Kells give the Sole Survivor the Exemplar's T-60c torso. (Note: While the armor is titled T-60c, it is leveled to the player character, meaning higher level player characters will receive T-60d, e, or f, while lower levels will receive a, b, or c.)

After the mission is complete, one can speak with Kells. Even though he states that a patrol team was sent in to clear out the ghouls, the room at the bottom of the ruins will still be populated by them.

Retrieved from "https://fallout.fandom.com/wiki/Duty_or_Dishonor?oldid=3513743"
Community content is available under CC-BY-SA unless otherwise noted.