The Screams of Brahmin
One for My Baby 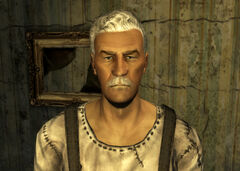 Dusty without his hat

“Beg your pardon mister, but them two-headed beeves ain't worth getting shot over.”

Dusty McBride is a rancher living in Novac in 2281.

Dusty and Alice, his wife, are the salt of Novac's earth. Honest, hardworking, and married for more than 50 years, they've seen much of what wasteland has to offer. Despite that, their love is as strong as ever as they continue to raise brahmin together in Novac.[1] Dusty's the man in charge of the brahmin, while Alice specializes in processing their meat into edible steaks - Dusty keeps joking it's the thing keeping him at her side - but their business recently ran into trouble. For the past several weeks, someone has been killing their brahmin each night.[2] They don't steal them, don't eat them, they just gun one brahmin down each night. And it seems to happen at the same time, around 12 AM, Dusty and his wife hear gunshots and mooing while in bed. When coming out to investigate what happened, Dusty finds the corpses of his livestock, riddled with bullet holes. The McBrides are at the end of their wits, especially since they're down to half their herd. Any longer and they'd be denied a livelihood.[3] [4]