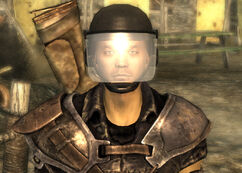 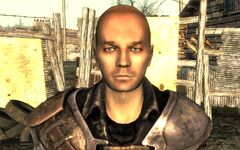 Dusty without his helmet

“Don't think you'll scare anyone here. You could shoot down everyone in town, and I wouldn't flinch. You live in Bigtown; you learn to accept death.”

Dusty is the watchman in Big Town in the year 2277, who can, for the most part, be found sitting on the chair overlooking the bridge - the only way into Big Town.

Pappy has given Dusty the responsibility of guarding the only entrance to Big Town - the rope bridge at the settlement's north end. He isn't very eager and usually sits dozing on his chair, perhaps one of the reasons why the super mutants seem to just walk in, take their "food", and leave. Dusty is jittery and desperate, and lacks the know-how to properly prepare the town's defenses for another attack.[1]

He is the sole sentry against the endless onslaught of super mutants from the German Town PD and the slavers from Paradise Falls. He often laments at the fact that if the mutants don't kill everyone, the slavers will enslave them. He, like all the other Big Towners, originates from Little Lamplight. He seems shocked by the position that he and the other residents are currently in.

As Big Town's sentry, Dusty levels with the player and is by far the toughest citizen of Big Town. However, his combat performance is still mediocre, he is not equipped and he lacks morale to deal with most threats that might attack the settlement.

Dusty appears only in Fallout 3.

Retrieved from "https://fallout.fandom.com/wiki/Dusty_(Fallout_3)?oldid=3081166"
Community content is available under CC-BY-SA unless otherwise noted.