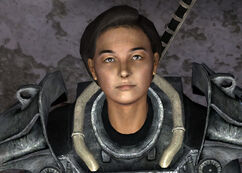 “Remember: One shot. One kill.”

Knight Captain Dusk is the sniper of Lyon's Pride in 2277.

Dusk is quite self-confident and believes herself to be the best sharpshooter not only in Lyons' Pride, but the entire chapter, being able to kill a super mutant from a mile away.[1] She generally spends her time practicing in the bailey.[2]

Dusk is a member of the Lyons' Pride. She has a fairly hostile rivalry with Knight Captain Colvin, who is the Pride's other sniper, mainly because she perceives him as sexist. This feeling may extend to the wider Brotherhood, as when the Lone Wanderer says, "The competition must be stiff around here," she will reply, "Damn right it is. Last time I checked, it wasn't called the 'Sisterhood of Steel.' Hell, even Sarah has to prove herself to the knuckle draggers."

Retrieved from "https://fallout.fandom.com/wiki/Dusk?oldid=3354547"
Community content is available under CC-BY-SA unless otherwise noted.