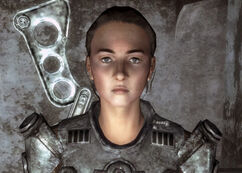 Knight Captain Durga is the Brotherhood of Steel quartermaster based out of the Citadel in 2277.

Knight-Captain Durga is the Citadel's quartermaster, a position that she is not exactly pleased to occupy. She'd rather be out in the field on missions and using weapons, rather than in the base polishing and cataloging them.[1]

Unlike most other denizens of the Citadel, she refrains from "archaic" language (the style of speech employed by Brotherhood of Steel members; such as Star Paladin Cross) in favor of more "modern" type speech ("yeah", "whatever", etc.)

She is located in the backroom of the armory in the Citadel laboratory. She never sleeps at any point of the day, even though a bed can clearly be seen behind her.

One needs the permission of Elder Lyons to trade with her. After completing Take it Back!, this permission is no longer needed.

Retrieved from "https://fallout.fandom.com/wiki/Durga?oldid=3244213"
Community content is available under CC-BY-SA unless otherwise noted.