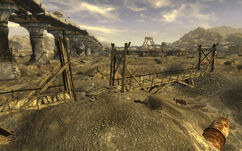 “You know what, what happened to my caravan - not the first time I've heard about an attack like that. One of our caravans got hit a few months back, and the caravan'd been burned, too, along with the cargo. I wonder if he made the same mistake, and that other caravan got hit with energy weapons, too.”— Cass

Durable Dunn's sacked caravan is a location along Highway 93, northeast of the east pump station in the Mojave Wasteland in 2281.

This was a caravan owned by Cassidy Caravans and likely run by an individual by the name of "Durable Dunn." Prior to the Courier meeting Cass, the caravan was traveling through this location when it was attacked and destroyed by members of both the Crimson Caravan and Van Graffs. Unlike the other two sacked caravans in the Mojave, this one seemed to have put up fierce resistance, indicated by the bodies of two Van Graff thugs and the body of a Crimson Caravan guard.

In an area between two wooden bridges, the bodies of two Van Graff thugs, one Crimson Caravan guard, and three ash piles will be found. There is a dead brahmin beneath the northern bridge. A campfire can be found at this location.

Retrieved from "https://fallout.fandom.com/wiki/Durable_Dunn%27s_sacked_caravan?oldid=3490320"
Community content is available under CC-BY-SA unless otherwise noted.