Dupont Circle is located in the northern part of the urban D.C. area, in the southeastern part of the Capital Wasteland in 2277. To get to Dupont Circle, you either have to walk out the backdoor of the Galaxy News Radio building and go through the collapsed car tunnel, or go through one of the many metro tunnels.

At the center of Dupont Circle is a parkway round-about, encircling a now non-working fountain bordered by grassy areas and sidewalks. The entire location is heavily mined with more than two dozen frag mines. Most are concentrated around the perimeter of the fountain with others strategically placed near building corners and alleyways.

A significant feature is the northern sunken roadway, guarded by feral ghouls, near the rear of the GNR building. The door to GNR is a one-way passage from that location and does not allow direct passage into the main part of Dupont Circle due to rubble blocking the way. Access to the circle initially requires a short detour through the ghoul infested collapsed car tunnel. Movement from the main circle to the sunken roadway however, bares no obstruction, only requiring the player to drop a short distance into it. The other end of the sunken road is located to the south of the circle where several more feral ghouls patrol its vicinity. Adjacent to its southern end, Dupont Circle station and the other car tunnel access door are found.

To the north east and west, and south east and west are various roads which don't run far due to collapsed buildings. Each of the passable spurs into the ruins are guarded by raiders, the presence of which, along with the many mines placed throughout the area, make access to the metro stations, sewers and Lady Frumperton's Fashions unlikely to be achieved without a fight.

The largest concentration of raiders in the D.C. ruins can be found here. They number nearly two dozen, mainly spawning as the player explores the location. Some of their number will respawn after a while. There are also several feral ghouls located at each end of the collapsed car tunnel as well. Vicious dogs may also spawn here.

There is a poster that points out that the Dupont Station under Dupont Circle had just been remodeled before the war.

Dupont Circle appears only in Fallout 3.

Dupont Circle is a real-life location in Washington D.C.

The Tales of a Junktown Jerky Vendor may not spawn at all in Lady Frumperton's Fashions, or will spawn and fall irretrievably behind the safe. [verified] 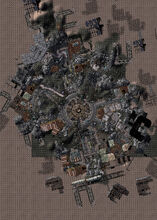 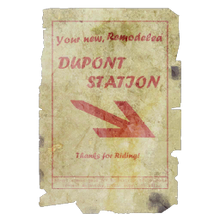