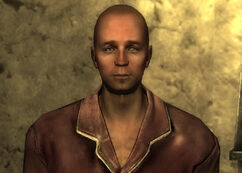 Dukov is a 43-year old[1] drunken womanizer. He is likely Russian or of Russian descent.[1] He can be found in the Capital Wastes in the year 2277.

He's one of the three surviving mercenaries hired by Allistair Tenpenny for an expedition into Fort Constantine. He is now retired, and lives in his estate (Dukov's Place) along the east bank of the Potomac River in the D.C ruins.

You Gotta Shoot 'Em in the Head: Dukov possesses one of the keys Crowley desires. There are a variety of ways to obtain it.