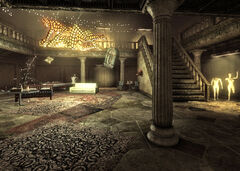 “Out here, nobody bothers me. I can do whatever I like to whoever I want.”— Dukov

Dukov's Place is a pre-War hotel located near the Anchorage Memorial and the tepid sewers and is now used as a dwelling and a venue for wild sex and drug parties by Dukov and his two female companions, Cherry and Fantasia.

Dukov's Place is a squat, square hotel with a similar appearance to Tenpenny Tower and the Statesman Hotel. The front entrance is surrounded by wooden barricades, bearing the badly painted and grammatically incorrect warning, "Keep Yor Wepons Holstred or Get Shot,".

An outpost with an Enclave officer, two random Enclave troops and a deathclaw in its cage can be found behind the building after The Waters of Life quest, or if Broken Steel is installed. If the officer is killed, a vertibird will arrive at some point to drop off up to four Enclave soldiers who will re-spawn in time after being killed.

The Anchorage War Memorial near the hotel presents the threat of mirelurks on top of the Enclave threat. Even before completing The Waters of Life, there may be a single Enclave soldier near the building. Just past one building south of Dukov's Place is an unmarked yet well-stocked raider compound.

The interior of Dukov's Place is a two story bachelor pad, with the same light fixture included in the love machine theme for the official player housing, and an upstairs shooting range for a BB gun.

Dukov's Place appears only in Fallout 3.

Dukov's Place is a pun on Duke's Place, a '60s jazz song by Duke Ellington.