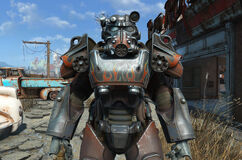 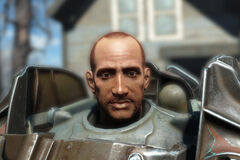 “I've got this idea, hear me out. A suit of power armor with a jetpack on the back. Well, it's a far out idea, but it would never work...”

Duke is a power armor-wearing member of the Atom Cats living in the Commonwealth in 2287.

Duke marks the location of Atom Cats garage on the player character's map if spoken to.

Duke appears only in Fallout 4.

Retrieved from "https://fallout.fandom.com/wiki/Duke_(Fallout_4)?oldid=3289741"
Community content is available under CC-BY-SA unless otherwise noted.