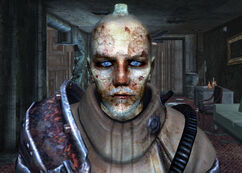 “Watch your back around here. Nobody got to Uptown by playing nice.”

Duke is a Pitt raider who resides in The Pitt Uptown in the year 2277.

A stuck-up raider with delusions of grandeur, he is vying for Krenshaw's position and has the rifle prowess to back up some of his plans. He knows the history of the place and of Ashur, and he does not mind sharing it with the Lone Wanderer, telling them all about this motley crew.[1]

He can be seen either warming his hands at the fire next to where Phantom, Mona, or Squill are practicing their melee strikes, or shooting at the beer bottles at the same place where O-Dog and Vikia practice.

He will congratulate the player character for fighting their way out of The Hole, and he will tell them about how most of the raiders were once slaves and also fought their way out of The Pitt, which contradicts the stated fact that there have only been three slaves that have ever done this, these being Gruber, Reddup and Squill.

If he is killed while the player character is wearing Leather Rebel, then one will hear Duke say, "That Preacher lied..."

Duke appears only in the Fallout 3 add-on The Pitt.

Duke's name is derived from Duquesne University located in the Oakland district of Pittsburgh, The Pitt Uptown equivalent. The football team and mascot are also called the Dukes and the Duke, respectively.

Retrieved from "https://fallout.fandom.com/wiki/Duke_(Fallout_3)?oldid=3440075"
Community content is available under CC-BY-SA unless otherwise noted.