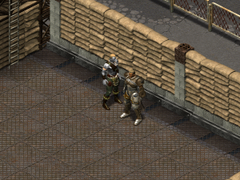 Duff, on the left side

Duff the beast master was, along with two unnamed Beastlord commanders, in charge of the attack on Quincy in 2197.

Duff was a skilled warrior and, while speaking, he imitated his master, Emperor Daarr. He is actually a direct relative to Daarr and he shares a lot of aspects of Daarr's personality. In other words, Duff is a raving madman. He resided in the pre-War prison, now a barracks of Quincy, where he held Felix Stiles as a hostage. He was probably killed when a squad of Brotherhood of Steel came and liberated the town.

Duff appears only in Fallout Tactics.