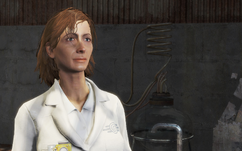 Doctor Duff is a resident of Diamond City in 2287. She along with Professor Scara both work and reside in the Science! Center.

The open and easy-going Doctor Duff is the public face of the Science! Center, responsible for interacting with visitors and schoolchildren on field trips. She's a treasure trove of knowledge, particularly relating to biology, and doesn't shy away from sharing it with anyone willing to listen.[1] She is also very absent minded and impulsive - someone who would just start a project and have to apologize if it got in someone's way. That someone is usually her lover Professor Scara. The pair operate as the classic "odd couple."[2] While Duff has a multitude of experiments running simultaneously, Scara focuses on one at a time, even when Duff tries to get her to help her.[3] Duff has also has taken to cleaning up their home and laboratory, to the chagrin of Scara, who didn't want her laboratory space rearranged.[4]

During the quest Liberty Reprimed, Duff will ask the Sole Survivor to rescue Professor Scara from the General Atomics Galleria. With Scara's absence, Duff is depressed and uninterested in her work, feeling depressed at her not being present, and hopeful for her return.[5][6][7] Scara, joining the Brotherhood of Steel, leaves her without her partner.

Doctor Duff appears only in Fallout 4.

Retrieved from "https://fallout.fandom.com/wiki/Duff_(Fallout_4)?oldid=3416951"
Community content is available under CC-BY-SA unless otherwise noted.