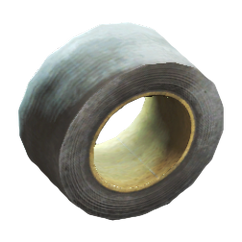 Duct tape is a junk item in Fallout 4 and Fallout 76.

A roll of gray adhesive tape used before the war to seal ducts, leaks and fix just about everything. Post-War they can be used to make weapons.

Duct tape (along with wonderglue) is the main source of adhesive in Fallout 4. Adhesive is a rather rare and much sought-after element since it is used in almost every crafting recipe. The most widespread form of duct tape is the single roll, but sometimes one can find military-grade or packed variants, which provide even more adhesive.

The duct tape can be broken down into its individual components for use in crafting:

Retrieved from "https://fallout.fandom.com/wiki/Duct_tape_(Fallout_4)?oldid=3124722"
Community content is available under CC-BY-SA unless otherwise noted.