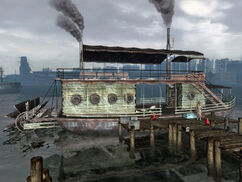 xx00AC49
Arrival bell Duchess Gambit
“You should have seen her back in her heyday! Why, we traveled up and down the coast, from the Commonwealth to the Broken Banks. Good times, but these days she's not fit to take out to the coast. Too many spouts ready to drown her, and too many critters looking for lunch.”— Tobar

The Duchess Gambit is a steamboat that appears in the Capital Wasteland in 2277.

The Duchess Gambit was a small sightseeing vessel used for tourist excursions along the Chesapeake Bay before the war. Tobar's grandfather found her and, with the help of his caravan, restored the boat's boiler, allowing the vessel to be powered by steam heat from any fuel that will fit inside the burner. Tobar has various ports of calls along the Atlantic Seaboard. Tobar's current career as a ferryman revolves around the punga fruit produced at Point Lookout.

Operated by Tobar the Ferryman and later by Nadine, it transports the Lone Wanderer to Point Lookout. It is comparable to that of The Pitt's rail car, and the Presidential metro in the Broken Steel add-on.

Tobar sells the player character tickets for 330 caps each (with 100 Barter, having Master Trader in addition drops the cost to 300), although, upon proceeding far enough into the main quest line, the player character is able to ride for free when Nadine takes command of the ferry.

The Duchess Gambit appears only in the Fallout 3 add-on Point Lookout.

The original model for the Duchess Gambit was created by Point Lookout lead artist Nathan Purkeypile.[1]

The Duchess Gambit' in the Point Lookout Pier