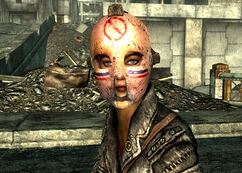 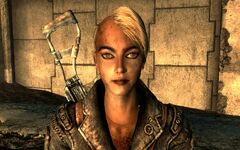 Dubois without her mask.

“I like these guys. They let me play with their pucks.”

Centre Dubois is the center player of an ice hockey team/gang, called Sudden-Death Overtime, who want to bring the ice hockey-mania back to America in 2277.

Centre Dubois is a member of the Sudden-Death Overtime gang, obsessed with an ancient ice sport that Goalie Ledoux's ancestors played.[1]

Since Centre Dubois is a member of the Sudden-Death Overtime gang, she is friends with the other members: Goalie Ledoux, Winger Mercier and Winger Gervais.

Centre Dubois appears only in Fallout 3.

Full body shot
Add an image to this gallery

Retrieved from "https://fallout.fandom.com/wiki/Dubois_(Fallout_3)?oldid=3125084"
Community content is available under CC-BY-SA unless otherwise noted.