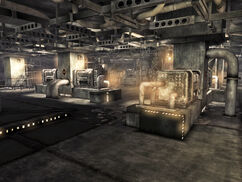 “Your best bet is to stay with the metro tunnels. Head north from here to Metro Central. Then look for the tunnels to the Dupont Circle station. Exit from Dupont Circle station into what we call the Dry sewers and eventually you'll wind up in Our Lady of Hope Hospital.”— Reilly directing the Lone Wanderer to Vernon Square.

The dry sewer is a sewer system that can be reached from Dupont Circle. It is one path to Our Lady of Hope Hospital in the Reilly's Rangers quest.

The first area of the sewer is patrolled by Talon Company mercs, the entry room contains two if it is entered from Dupont Circle. There is a grenade bouquet in the descending stairwell of the aforementioned room. With a high enough Explosives skill it can be disarmed or walked around. Proceeding further into the sewer, a battle between two more Talon Company mercs and two super mutants may be encountered to the west, one of which has a minigun. The cul-de-sac from which the super mutants attack contains a number of medical supplies and a ham radio.

To the east is a dead-end maintenance room that holds a number of parts, as well as a chamber containing waste barrels. The chamber is filled by a cloud of flammable gas, which may be ignited with energy or flaming weapons, or by firing a conventional weapon while inside the cloud.

Moving uphill from here leads to a dead-end, while a maintenance door leads to the hospital's boiler room. The boiler room is full of super mutants. From here there is a door to the hospital, as well as spare parts and a number of medical devices. Once cleared of enemies, the mattress on the ground (not the ruined bed) at the far end of the tunnel can be used to sleep.

South of the main sewer junction is a utility room, and in the back, there is a copy of Dean's Electronics on the shelf.

The dry sewer appears only in Fallout 3.

Dean's Electronics
Add a photo to this gallery
Retrieved from "https://fallout.fandom.com/wiki/Dry_sewer?oldid=3203477"
Community content is available under CC-BY-SA unless otherwise noted.