Lonesome Road
“No, opposite of that. It's where my tribe was taken. Where another history was put to the blade, lesson taught. It is where we realized Vulpes did not approach us as equals. Where we realized the wolf had come, and we watched our history die. Now it belongs to Legion... and all the death there now belongs to them as well. Not revenge... just the way of things when you own them.”— Ulysses

Dry Wells is a tribal camp located south along the Colorado River from Cottonwood Cove in Arizona in 2281. It is currently occupied by Caesar's Legion. It will only be accessible to the Courier after completing the Fallout: New Vegas add-on Lonesome Road, by aiming nuclear weapons at Legion territory; and can only be reached by the boat in Cottonwood Cove.

Taken from their home, the Twisted Hairs tribe was destroyed here after Vulpes Inculta betrayed them, subsequently assimilating them into Caesar's Legion and crucifying those who resisted.[1][2]

Dry Wells consists of several burned tents and crumbling buildings along a road from an irradiated stretch of the river, ending in a large crater. Attempting to enter the crater will cause instant death. Just south of the boat the Courier arrives in are a couple of crates behind an overturned boat with random loot. Several burned tents are also scattered about the area, along with numerous ammunition boxes and weapons crates. The entire camp is filled with irradiated Legionaries and irradiated Legion explorers, along with their centurion, Gaius Magnus.

A black outline of a person who was vaporized by the blast can be found on the building facing the crater. These imprints happen in the real world and are called "nuclear shadows," caused by the intense heat of an atomic blast. The blast changes the colors of surfaces like steps, walls, and pavement. When people or items block this light, their outline is left on the surface behind them. In the real world, the impression on the wall would be the opposite of that seen in-game, with the dark area consisting of the individual and wall or surface appearing lighter, akin to a real shadow. 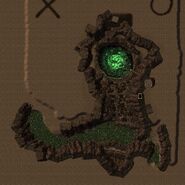 Dry Wells in an endings slide

High-tech gun case with high tier loot near the docks