Nuka-World
“Mosey on into the Wild West for a taste of authentic American adventure in Dry Rock Gulch. Yeeh-haw, cowboy!”— Promotional quote

Dry Rock Gulch is a location in the Nuka-World Amusement Park in 2287.

Dry Rock Gulch was the first Nuka-World park expansion, launched in 2058.[1][2] The park was also constructed in part as a celebration of Nuka-Cola Wild, Nuka-Cola's own root-beer variant.[3]

Traders fleeing raiders barricaded themselves inside Mad Mulligan's Mine, and bloodworms living within killed them.[4] Since then, the gulch has become a breeding ground of bloodworms, with the local authorities deeming it to be an infestation of deadly worms.[5]

The tower near the mountain coaster is accessible with a power armor jetpack and has a Nuka-Cola Wild and a mini nuke, along with two ammo cases. It's possible to hop over the mountains to the employee area which is filled with frag mines and feral ghouls. It is also possible to get up on top of the above-ground part of Mad Mulligan's Minecart Coaster to find additional loot, including a toy sloth hanging onto an overgrown vine on the upper part of the coaster.

Dry Rock Gulch appears only in the Fallout 4 add-on Nuka-World.

Statue of Bottle and Cappy

The upper level with loot

Lower level of the tower

Power armor west of the gulch

Sloth plushie on the roller coasters 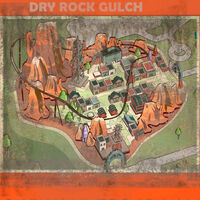